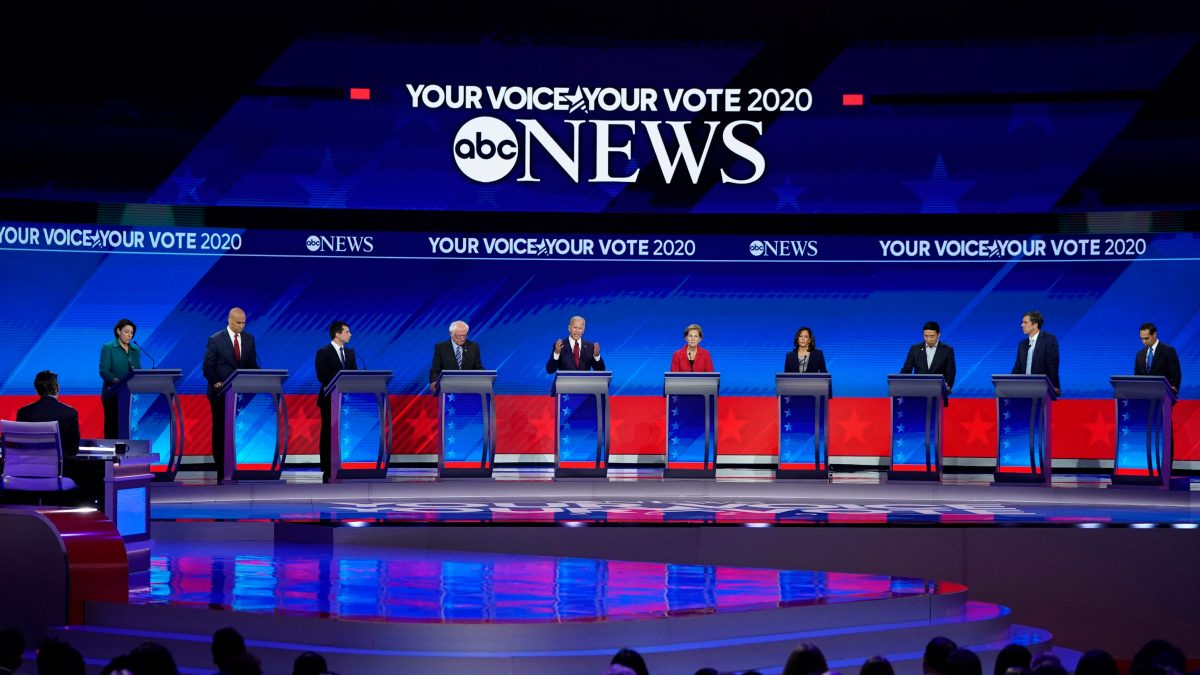 Today 20 November 2019 CE, was the first debate for the Democratic party happened in Georgia. This was with 9 Democratic candidates. This was the 5th of 12 debates.

The Canidates that were in the debate are Joe Biden, Bernie Sanders, Elizabeth Warren, Kamala Harris, Pete Buttigieg, Tom Steyer, Andrew Yang, Cory Booker, Amy Klobuchar. There are other democratic canidates running, but none of them were able to qualify for the debate. Biden, Sanders, Harris, and Warren all have about equal percent, 17% according to FiveThirtyEight. Pete Buttigieg has 16%, Tom Steyer with 8%, Andrew Yang with 5%, Booker with 5%, and Klobuchar with 4%. Klobuchar’s appearance was kind of a surprise as they had not been doing that well. You need about 3 percent in order to qualify for the debate. The democrats made strong promises like Free Healthcare and more paid leave.We are honestly unsure if the democrats will be able to keep their promises, as most of them still support capitalism and reform over revolution. Almost all of them talked about climate change and most of them discussed plans on what they would do about it and how they planned to set an example for other countries. Most of the  candidates were against continuing relations with Saudi Arabia, or at least wanted to put more pressure on them and to stop selling them weapons. They also supported trying to get Iran and Saudi Arabia to work together and to put pressure on both of them, and in general to create a new foreign policy. Many of them still seemed to have nationalist sentiment, saying how as a nation we should be united. Impeachment was also an issue commonly covered between most of the candidates. Regime changes were generally looked down upon in this debate. Most of the candidates were almost completely Pro-Choice. They were sure to talk about recognising white nationalist groups as domestic terrorists, as well as other racial issues. Voting rights were talked about by people like Sanders and Kolbuchar. This is most of the you need to know about the democratic debate from 20 November 2019. If you want to know more information about what each candidate talked about, we suggest you read this article on the Democratic Presidential Debate 20 November 2019.